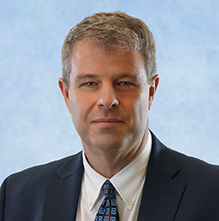 Michael Schmitz co-leads Smart Building Technologies (SmartBT) and is a Partner at Fidelity Building Services Group® (Fidelity BSG). As one of the founders of SmartBT, Mike – alongside founding partner Paul Meng – has spent over a decade building the company into an industry leader in building automation.

Mike has 30 years of industry experience with multiple generations and types of controls. As Principal at SmartBT, Mike provides oversight of day-to-day operations and administrative management of the company.

In 2020, Paul and Mike became Partners at Fidelity BSG when SmartBT joined the organization’s national portfolio of companies. This partnership will elevate the visions, missions and values of both organizations and allow SmartBT to leverage Fidelity BSG’s best practices and further deliver on its commitment to a culture of service.

Mike graduated from Towson University in 1990 with a Bachelor of Science degree in Political Science, and earned his Commission as a 2LT, Infantry from the Loyola College ROTC program. He has also earned various technical certifications from Distech Controls, Computrols, Cylon Auto-Matrix as well as other providers of building automation technology.